The Guerrilla marketing It is a special version of Marketing that is based on the surprise effect. Its main objective is that the advertising campaign generates an impact on a large scale with the minimum investment.

The Guerrilla marketing is a concept based on unconventional methods that aims to surprise customers. The attention it manages to capture from users makes it a very effective strategy that requires little investment compared to other classic measures, such as elaborate and expensive advertising campaigns.

Unconventional and atypical measures are used to make them unpredictable. We must not forget that a specific campaign of Guerrilla marketing it should not be repeated, it would lose its wow factor. The main principle is to provoke a reaction in the media, public relations and social networks so that it spreads virally. If the same measures are repeated, the surprise effect would be lost and could even cause negative results since the public would lose interest in the subject. 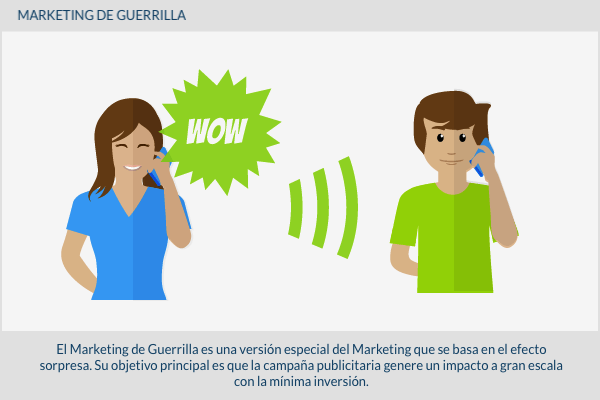 The main objective of this type of campaign is to maximize the impact of the advertising campaign. A traditional advertisement struggles for years to be able to generate a large impact on the public and can even end up saturating the public. Every day between 2,500 and 10,000 different advertisements are exposed that try to capture the attention of the public to whom they are directed. For this very reason, the main objective of the advertising campaigns of the Guerrilla marketing is to provide material that surprises and captures the attention of the masses, thus promoting a “passapalabra” effect.

The guerrilla campaigns They are intended to cause a surprise effect and a large-scale dissemination of information: surprise, break taboos or even ridicule the competition.

Right now there are many examples of this type of Marketing. The following examples are part of very successful advertising campaigns:

At first glance, this type of Marketing offers a good possibility to obtain a large-scale effect with a relatively low investment. However, there are risks: the “hype” they cause cannot be controlled. Therefore, if it goes viral, it can take different paths with negative effects. If, at the same time, the target audience does not like it, the campaign can provoke a flood of negative comments that cause a deterioration of the image of the brand and a reduction in sales. For these reasons, It is recommended to carefully consider all possible scenarios that may arise from the Guerrilla campaign before publishing it..