Clickbaiting is an online media practice used in blogs, news, and videos. The different types of content are given titles (clickbaits) that attract the attention of users and encourage them to click and share the content on social networks.

Titles should act as "bait" for the user and ensure interaction in the form of clicks. Regardless, critics frequently argue that the content behind the headlines is manipulative and generally banal, with no direct added value for the user.[1].

Clickbaiting is not a new form of communication. Exaggerated headlines in print magazines and tabloids employ a similar principle. In the television and film industry, the "Cliffhangers" also work in the same way. Clickbaits are designed to arouse user curiosity. Clickbaits must promise the user something that they get with a single click on the article. It does not consist of the presentation of a product or service and it does not consist of useful information.

It is more about trying to increase traffic on the particular platform in order to monetize the web later with the placement of online ads. 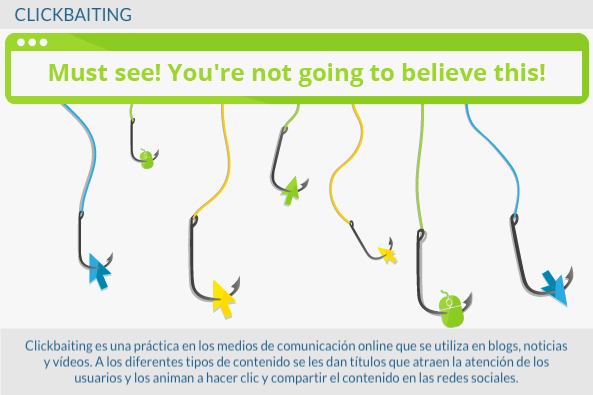 Each online medium has its own formula to earn more clicks. In most cases, the headlines play on the curiosity of the users and appeal to certain impulses, emotions and thoughts[2]. Something that is incredible, authentic or unexpected is promised and communicated through specific signal words.

A short introduction explains what is at stake. The main part of the content mainly contains viral videos or photo lists (listings) with short explanations. The message concludes with a summary that has a message for the user to take home. This also entails the incorporation of buttons such as, share and comment in clickbait messages so that the interaction with the user is as simple as possible.

The structure, tone and choice of words cause different psychological effects on the user, so that, with a very high probability, the user ends up clicking on the message and even sharing it on social networks. In the same way, controversial, polarizing or very emotional issues are also communicated, since users generally have a specific opinion about said content. The topic is presented from a very unusual point of view that contradicts the opinion of users. A suspense tells the beginning of the story. The ending is only revealed when the user clicks on the message.

In recent years, clickbaiting has increasingly become a topic of discussion. Journalists complain about the quality and usefulness of clickbait posts, as they often only present a small gift of entertainment to users. On the other hand, advocates identify clickbaiting with a new form of online communication that precisely meets the psychological needs of users.

In terms of monetizing such websites, the success rates show that the defenders are right. Portals like Buzzfeed or Upworthy cause so much traffic that they are among the most popular sites on the net. Regardless, they sometimes do this by adding content. For example, third party images and videos are only augmented with comments and conclusions for distribution within the Internet community on social media. From a copyright point of view, this is minimally questionable[3].

The added value for the user is also questioned by Facebook. In August 2014, the company modified the news feed's algorithm to regulate clickbait traffic. Facebook wants to measure the time a user spends with such a message and integrate it into the news feed algorithm. Social signals, such as likes, shares, and comments, are further scaled to identify the importance of such messages to the user.

The explanation: Clickbait headlines assure the user of something they cannot find in the post. The facts are false, and users prefer headlines that inform them about the content of the message.[4]. Therefore, the traffic of portals used by clickbaiting in the social network could be reduced by changing the news source.