Crossposting (cross posting, or cross posting) is the act of posting the same message on different social media platforms. This is often done automatically using social media tools that distribute the message as soon as it is edited. Crossposting is also known as multi-channel posting or multi-posting.

The term crossposting originates from forums and newsgroups on the web. If a user has a question on a certain topic, they can post it in different threads to increase the probability of getting an answer. Crossposting in these environments is always used if the connection of the question to a thread is not clear to the user. In most cases, it is the webmaster or forum administrator who deletes the duplicate question once the thematic focus and connection to a particular topic is clear.

However, the current use of the term is far from its origin. In the context of social media, crossposting is a common method used by large companies. It can be used to ensure that a position reaches a much larger audience while reducing workload. A message is edited and entered manually on the channels or distributed using an appropriate application. 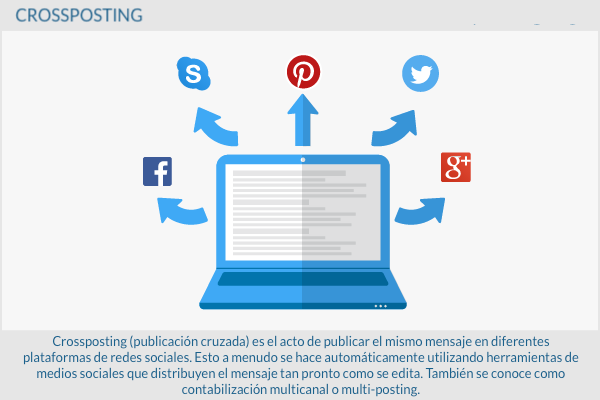 The special tools used for multiple message posting work on a very simple principle: A message can be edited once the access information for the different networks has been entered.. You can then choose the networks in which the message should appear. Hashtags, images, etc. they can also be added. Many of the tools also support a delay in sending messages, as well as the monitoring of social networks.

A selection of cross-publishing tools:

Crossposting saves time and reduces workload. Fundamentally in companies that have many social media profiles, it is almost impossible to manage all the profiles manually. However, a downside to cross-posting is the fact that such content may be viewed by search engines as a duplicate of content, and certainly poorly rated. However, it depends on the type of position and the extent to which it is sensible to post it on different channels. For example, in the case of a photo that may be interesting to many users, there is no question that cross-posting makes sense. Users can benefit from this if they are not active on certain networks and would not be able to access the photo otherwise.

On the other hand, for a message that is written specifically for a certain channel, crossposting may no longer be sensible. In this circumstance, it seems more appropriate to create a matching entry for each channel. Not only from the perspective of search engine operators, but also for netiquette reasons. Social networks intrigue their users at this time through direct communication from person to person or company to person. Anyone who wants to continue using crossposting on social media should be prepared to deal with the eventual frustration of customers who are active on multiple networks and thus see the same message multiple times.

The reasons for this frustration are the special properties of the respective network. User groups are sometimes very different, as are the requirements for formatting and job distinction. A hashtag on Twitter would be meaningless on Facebook, a Facebook link in a Tweet is considered a bit out of place by most users.[1] If a company wants to risk losing an image, it is not only because of the number of users and the workload. It is rather a question of principle that can only be answered through a consistent social media strategy.