The Google Data Center or Google Data Centers they are the most important parts of Google's infrastructure. Data centers provide hundreds of millions of web pages and responses to search queries from all over the world every day.

Any request on the Google home page uses data stored in one of the many data centers. If you enter a term in the Google search bar, you will get a list of search results in a few seconds. The web addresses, the descriptions and the order in which these web addresses are displayed are stored and structured in the data centers.

Google's data centers are spread across the world. Confirmed locations are, for example, Lenoir (North Carolina, USA), Mountain View (California, USA) and Dublin (Ireland). Today, Google is investing in the construction and expansion of international locations such as Berlin, Paris, London and Tokyo. However, the company maintains the confidentiality when it consists of more detailed information about your data centers. Only photos of official data centers are released. The reason is very simple; Google views its own infrastructure as a competitive advantage over its competitors [1]. 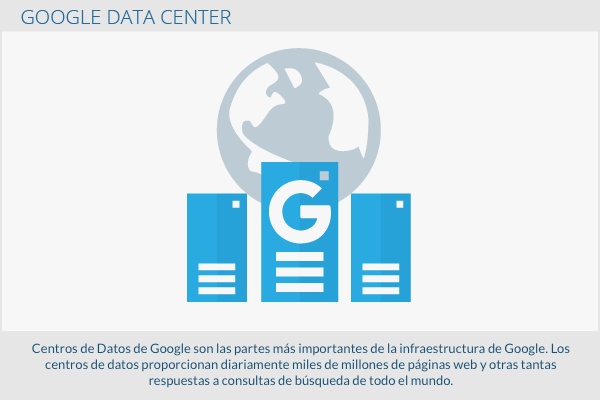 International data centers are generally used for provide country-specific versions of Google or to create new capabilities through network interconnection. In the interconnection of networks, data centers are connected to allow the exchange of data from equivalent networks. It would not make much sense to pass an inquiry from Germany to the US.

According to the CDN (content delivery network) architecture, these queries are answered more quickly and reliably if the participating servers are located in the same country. Google has likely designed its international data centers for regional searches for specific countries. The regional index used by Google since 2012, shows the websites from the specific location and in the specific language from where the search query originated.

The technology used has been developed by Google. It uses special network devices that increase efficiency and, combined with a battery, ensure constant server availability. The power supply is usually carried out with renewable energy, which Google promotes massively. At the same time, Google uses various software solutions to process large masses of data. It is worth mentioning here the Google file system and BigTable, which have been specifically optimized for large volumes of data and can use the resources of various data centers. Even Google's web servers (GWS) and Google Front End (GFE) are integrated into Google's data centers. And so is MapReduce, a programming model that can perform parallel calculations for extremely large data streams. All programs and systems used in Google's data centers are owned and protected by copyright.

The lists of the IP addresses of Google's servers are often circulated among SEOs. Fundamentally when an index update is due, the position of a web portal is useful. Therefore, SEOs can estimate where their web portal will be found in the search index after the update. For this, the path of a search query must be followed to the server, which takes some technical effort. At the same time, Google regularly changes the addresses of the servers. A current list is likely to be out of date after a few weeks.

At the same time, it is usually the case that a particular web portal and keyword is assigned a PageRank in different data centers. When analyzing the data, it is interesting to know in which data center the PageRank originated. Typically, IP addresses are classified by class C networks or clusters. Both user websites and Google pages can be analyzed for their PageRank inside (and outside) a class C network. This provides data SEO valuable information on the position of a keyword and the respective domain in the search index of a specific Google data center.