It is understood by smartphone optimization the measures aimed at achieving optimal results in the display of web content on mobile devices. To improve the usability of mobile devices such as smartphones or tablets, Google has created, among many other factors, a ranking. 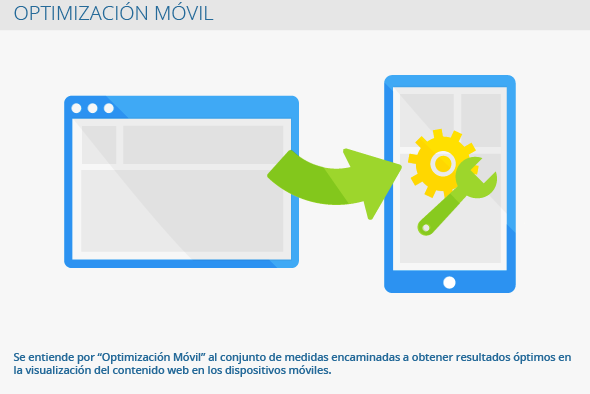 Characteristics of internet use on mobile devices

There are many differences between the use of the internet on mobile devices and its use on computers or notebooks. Examples:

Smartphone optimization of a web portal

Those who want to make the most of their web portal for mobile devices have two ways to achieve it:

Its web portal and all its functions are adapted to a Responsive design: content such as texts, images, etc. is adapted to the dimensions of the smartphone device. In this case, it does not matter what are the dimensions of the device that the user decides to use (Eg a 10-inch or 4-inch tablet) since it will adapt correspondingly to its characteristics. The downside to this layout is that not all content may fit properly.

The second version is designed primarily for mobile devices: all content is transferred to a smartphone URL. This option is more complicated since the content of the computer version must be transferred in its entirety to a Smartphone URL.

These are the two cases that are normally found:

The optimization of mobile devices is essential for companies that want to follow the concept of "Mobile First" , smartphone first, for your web portal.

When this optimization is carried out, several errors can be made:

As we have mentioned previously, there are many errors when completing the smartphone version optimization of a web portal. Later we name some tips that help to avoid them:

Subsequently adapting the web portal to the smartphone version, a simulation must be carried out to review its functionality. For this, there are different tools such as, for example, the simulator Startmobile.de, one of several Google initiatives.

The mobile device optimization is a very important part of the SEO since the use of mobile devices is always on the rise. Apart from this, Google promotes the optimization of smartphone content by offering assistance through the Google Webmaster Tools tool, since as of April 25, 2015, the smartphone version of a web portal will count as an influencing factor for positioning in the SERPs.