A conversion represents a specific action or "change" such as a visitor making a purchase and becoming a customer. The conversion It is measured by the Conversion Ratio which, following the previous example, corresponds to the number of buyers: percentage of visits that have ended up buying something.

The word "Funnel" means funnel, and includes all the steps that users follow from entering a web portal until, for example, they make a purchase. The main goal of getting the most out of the conversion funnel is minimize the number of visitors leaving the web portal so that sales increase. 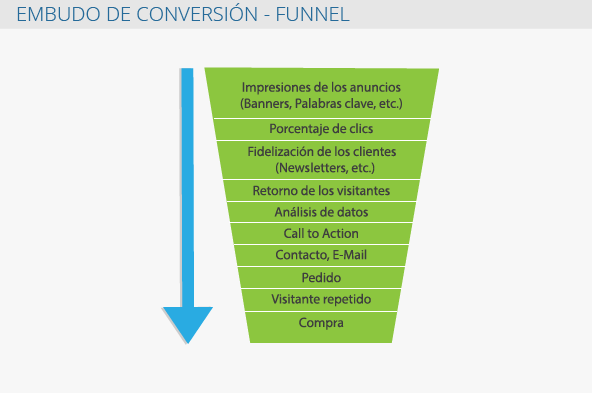 According to the report of "ECommerce Trend Report 2004" From DoubleClick, only a quarter of all users of a web portal end up checking out in the same session. Most users return to the web portal after a couple of weeks and complete the purchase. To increase the chances of the purchase being made in the same session, different optimization strategies can be carried out. According to this study, customer ratings help increase trust in users and ultimately increase sales and, perhaps, build customer loyalty.

Another alternative is the use of multimedia commercial promotion, such as Flash, which provides content that encourages the purchase. The design of the web must be oriented to sales since it has a considerable impact on them.

To avoid the risk of potential customers leaving the web portal (that is, the Bounce Rate decreases - "Bounce Rate) it is recommended to redirect the ad user directly to the product. In spite of everything, if many clicks are needed to get from the ad to the product to be marketed, the chances of abandonment increase considerably.